We will quickly and clearly guide you through the extensive range of the GENTEC CHP units and help you choose the right one according to your specifications. 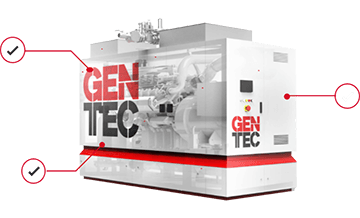 Have you opened gentec.cz in a country other than the United Kingdom? Go to the site of your region, where you will find prices, promotions and events that apply to it

/ Current News / Expensive energy will change our behavior, says the Head of the state company of ČEPS

In an interview for SZ Byznys, Martin Durčák, the Chairman of the Board of Directors of the state-owned company ČEPS, explains how the Czech Republic is doing with the energy security.

In the interview, he discusses, among other things, the issue of support services and the need to build resources that will provide the power balance services for the grid. Mr. Durčák stated, for example, the following: “When many more unpredictable resources start to connect, the demand for these services will increase and we will have to demand more of them. The backup resources must be able to start operation within 15 minutes now and, by 2022, they will need for this no more than 12.5 minutes. And they really need to be reliable.”

He added that the aggregation flexibility will also play a role in managing the stability of the distribution network. He then told readers the following on the topic of the flexibility aggregation: “One conventional power plant can reduce or increase its output by, say, thirty megawatts on command. But the new flexibility aggregator can also serve a similar purpose. That is, the entity that manages, say, 30 small-sized CHP units of one megawatt. Or 60 half-megawatt cogenerations. ČEPS will communicate with this aggregator and this aggregator will guarantee that those thirty CHP units in various locations in the Czech Republic will react in the same way as one large power plant. All of them will either reduce or increase their output on command, as required.” It is clear from the above that the CHP units will play a significant role in providing the grid stability and that ČEPS is counting on them to some extent.

We only add that in addition to the mentioned small-sized CHP units, we are also ready to supply large supplies with an output of 3-12 MWe on individual CHP units. We are already involved in the preparation of some projects and we will soon open a section on our website dedicated to these technologies. For the time being, we are presenting them at conferences, we spoke about them for example at the ENERGETIKA 2021 CONFERENCE or at the DNY TEPLÁRENSTVÍ A ENERGETIKY 2021 event.

We are also involved in the development of a smart control system for CHP units to control them in the context of resource aggregation, which is also the focus of the paper.

If you are interested in the possibility of building the large-scale or small-scale CHP units or if you would like to learn more about our CHP control system solution in the virtual power plants feel free to contact our Sales Team and we will be happy to discuss the possibilities of cooperation with you.

Use of combined Heat and Electricity in Heating Industry

” We will not allow the disintegration of the central heat supply, we will use combined heat and electricity and we will equalize market conditions. “ This is stated, among other issues, in the coalition agreement signed by the Representatives by SPOLU and PirSTAN. The commitment to the support of use of combined heat and […]

We have become a member of HYTEP

Hydrogen will be part of the energy mix of the future. And it does not have to be the distant future. In GENTEC CHP s.r.o. we are already working on the development of a cogeneration unit burning hydrogen. Because we are serious about hydrogen and we want to work with the best experts in development, we […]

How to save on energy bills? CHP units are one of the options

Seznam Zprávy, the web information portal, published an article How to save on energy bills? today. The biggest changes in 100 years are coming, experts say, quoting our colleague from GENTEC who is responsible for the Business Development in the Czech Republic. The article states, for example, the following: A CHP unit of 50 to […]

If you agree to the use of all cookies (technical, analytical and advertising), click on the button below "I accept all". If you only want to accept or reject some cookies by category, click the button below "Detailed settings". You can change your cookie settings at any time.

These cookies are necessary for the proper functioning of our website, so it is not possible to disable them. You can set your browser to block these cookies. We warn you that in such a case some parts of the website will not work.

These cookie files provide advertising based on your preferences. We use them primarily to create a profile of your interests so relevant ads could be showed to you. If you will not state your agreement you will not receive content or ads tailored to your interests.